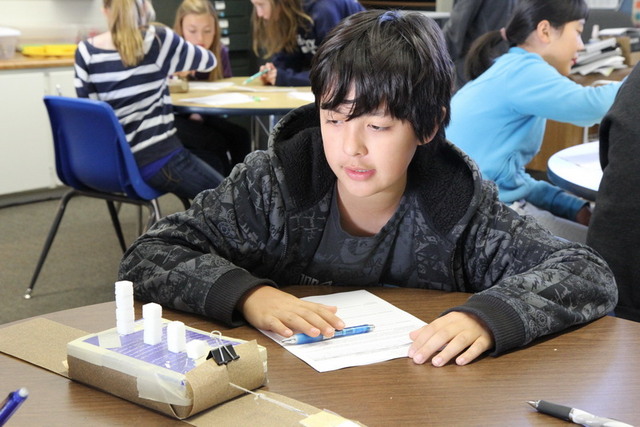 To measure the force required to pull the book along the sandpaper strip, a tension guage is constructed.

A rubber band with a paper clip attached serves as a meter for potential energy recording. As the string is pulled, the rubber band stretches. When potential energy has built up high enough, the pulling force overcomes the friction between the book and the sandpaper strip, resulting in a "jolt" of movement. This 'jolt' is a simulation of earthquake movement.

There are various tests to run on the system, including putting sugar cube stacks on top of the book to represent "buildings."  Data is collected and averaged to determine the results of various run sequences.

Sample Questions from the Lab:

1. What does the movement of the book on the sandpaper strip represent in this investigation?

2. The movement of tectonic plates occurs all the time, but earthquakes do not. Why doesn't plate movement cause continual small earthquakes? Why do earthquakes occur every once in a while? Explain your answer.

3. Did all of the energy stored in the rubber band release when the book slipped? Do you think an earthquake releases all of the stored energy when it occurs?

5. Earthquakes last longer than a few seconds. They do not simply start and quickly stop. Explain the relatively long duration of earthquakes based on the results of the experiment.

7. How did the drumming affect the intensity of the “earthquake” in the model?

8. Which sugar-cube building experienced the most damage? Why do you think this happened?

9. Which experiment resulted in the most damage? Why do you think this happened?

10. Given the results, suggest one safety tip that would reduce damage to buildings during an earthquake.