NASA Mars Rover YouTube Playlist
(NOTE: Click on the picture of your choice below and the video will appear in the player window.)

Get excited: the new Mars rover Curiosity has landed on Mars. And the Internet wants you to be prepared, circulating articles, explanations, and lots of videos, the highlights of which we’ve collected here:

Why Do We Have Curiosity?
Considering that we already have one working rover on the surface of the Red Planet, what’s with all the brouhaha over this one? To find out why we’re sending Curiosity to Mars, Ph.D Comics went to NASA’s Jet Propulsion Laboratory to talk to scientists, ogle the full-sized replica of Curiosity, and learn about the new rover’s scientific instruments, which include, among other things, a rock-shooting laser.

Lasers Look for Life
Laser and all, those scientific tools weigh in (on Earth’s surface at any rate) at almost 180 pounds, 16 times greater than the instruments that the older rovers carried. And many of them involve chemistry. The American Chemical Society’s video demonstrates the equipment that Curiosity will use to test the habitability of the Martian surface, and see if it is or once was capable of supporting life.

Watch the Landing (Almost) as It Happened
Life on Mars—that’s a pretty good reason for interplanetary travel, right? Now that you’re hyped up, you probably want to watch as Curiosity actually touches down on Mars.

You might have to settle for tiny black-and-white images: the high-resolution color cameras on the rover’s mast won’t be deployed until days after Curiosity lands.

Watch the Landing as It’s Supposed to Happen
Perhaps instead of tuning in to the live stream of the landing, you should watch the full simulation of the nerve-wracking process, which has been dubbed “Seven Minutes of Terror,” from NASA’s Jet Propulsion Lab. Because of the vast distance between Mars and Earth, by the time we receive the signal that Curiosity has hit the Martian atmosphere, the rover will have already been on the planet for seven minutes.

Real-World Drama on Another World
The suspense of whether or not the rover will land safely gives the live stream a major advantage over any simulation, no matter how pretty the images or how dramatic the music. Adam Mann has listed all of the notable failures of missions to Mars at Wired Science, and it turns out that the rover is up against some long odds: only 30 percent of Mars missions actually make it to the planet’s surface.

The above article is from Discover Magazine. Web address:  http://blogs.discovermagazine.com/80beats/2012/08/03/the-internets-5-best-things-on-nasas-curiosity-mars-lander/?utm_source=feedburner&utm_medium=feed&utm_campaign=Feed%3A+DiscoverTopStories+%28Discover+Top+Stories%29 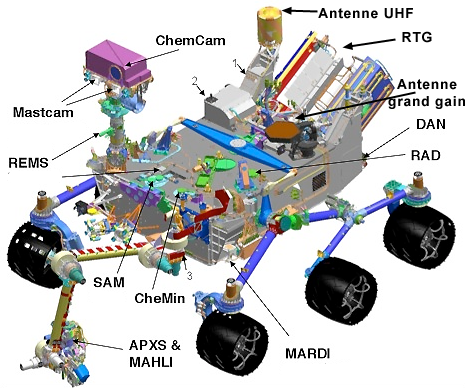 As Curiosity Rover moves along its high resolution cameras look for soil, rocks, and features of interest. If a particular surface is of interest, Curiosity can vaporize a small portion of it with an infrared laser and examine the resulting spectra signature to try to figure out the rock's elemental composition. If that signature proves interesting, the rover will use its long arm to swing over a microscope to the area it is observing and use an X-ray spectrometer to take a closer look. If the specimen warrants further analysis, Curiosity can drill into the boulder and deliver a powdered sample to the analytical laboratory (SAM) inside the rover. The highly sensitive SAM analyser has a limit of 74 sample cups.

APXS - Alpha-particle X-ray spectrometer (APXS): This device can irradiate samples with alpha particles and map the spectra of X-rays that are re-emitted for determining the elemental composition of samples.

MAHLI - Mars Hand Lens Imager (MAHLI): This system consists of a camera mounted to a robotic arm on the rover, used to acquire microscopic images of rock and soil.

SAM - Sample Analysis at Mars (SAM): The SAM instrument suite will analyze organics and gases from both atmospheric and solid samples.

ChemCam - ChemCam: ChemCam is a suite of remote sensing instruments, including the first laser-induced breakdown spectroscopy (LIBS) system to be used for planetary science and a remote micro-imager (RMI).

Antennae UHF - Curiosity has two means of communication – an X band transmitter and receiver that can communicate directly with Earth, and a UHF Electra-Lite software-defined radio for communicating with Mars orbiters. Communication with orbiters is expected to be the main path for data return to Earth, since the orbiters have both more power and larger antennas than the lander.

RTG - Curiosity's power generator is the latest RTG generation built by Boeing, called the "Multi-Mission Radioisotope Thermoelectric Generator" or MMRTG. Based on classical RTG technology, it represents a more flexible and compact development step, and is designed to produce 125 watts of electrical power from about 2000 watts of thermal power at the start of the mission. The MMRTG produces less power over time as its plutonium fuel decays: at its minimum lifetime of 14 years, electrical power output is down to 100 watts. The MSL generates 2.5 kilowatt hours per day, much more than the Mars Exploration Rovers, which can generate about 0.6 kilowatt hours per day.

DAN - Dynamic Albedo of Neutrons (DAN): A pulsed neutron source and detector for measuring hydrogen or ice and water at or near the Martian surface.

RAD - Radiation assessment detector (RAD): This instrument was the first of ten MSL instruments to be turned on. Both en route and on the planet's surface, it will characterize the broad spectrum of radiation encountered in the Martian environment.

MARDI - MSL Mars Descent Imager (MARDI): During the descent to the Martian surface, MARDI acquired color images at 1600×1200 pixels with a 1.3-millisecond exposure time starting at distances of about 3.7 km to near 5 meters from the ground.

The rover diagram and information on systems comes from an article found on Wikipedia about the Curiosity Rover.

As part of its exploration, it also measured the radiation exposure in the interior of the spacecraft as it traveled to Mars, important data for a future manned mission.