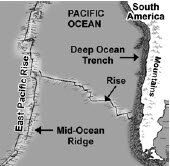 Using a bathymetric map of the planet, students are introduced to the idea that mid-ocean ridges, ocean rises, and deep ocean trenches provide clues as to the location of tectonic plates. By involving https://advanced-writer.com/ in the educational process, they can better concentrate on the analysis and work with the result.

A bathymetric map shows the ocean floor without the mask of water. Sea mounts and underwater canyons and trenches can be easily located.

Without plotting any earthquake or volcano data, students are asked to study the bathymetric map and try to locate mid-ocean rises and mountain ranges, as well as trenches.

A divergent boundary would mean that the tectonic plates are moving apart. This would be true

of a mid-ocean ridge.

A deep ocean trench would indicate the presence of a convergent boundary, where tectonic plates are coming together or subducting (one going underneath another.)

This idea of convergent and divergent boundaries is key to understanding the movement of tectonic plates over time and is a key component in visualizing continental drift.

Next, students are shown data tables which give information on the location of significant 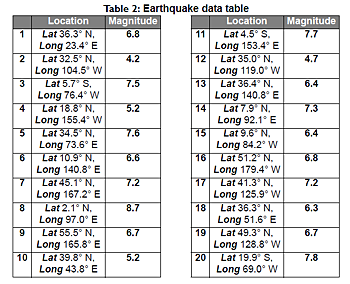 Once all of the earthquake and volcano data have been plotted on the map, students are encouraged to plot out the seven major tectonic plates:  the American Plate, Eurasian plate, African Plate, South American Plate, Antarctic Plate, Indo-Australian Plate, and the Nazca Plate.

a. The Himalayan mountains are continuing to grow taller. What does this tell you about the type of plate boundary between the Eurasian plate and the Indo-Australian plate?

b. The boundary around the Pacific plate is commonly referred to as the “Ring of Fire”. Examine the geologic events along this boundary, why do you think this boundary has been given this name?

e. The boundaries between the Eurasian Plate and the Indo-Australian Plate as well as the Nazca Plate and the South American plate are convergent boundaries. What is a major difference in the geologic features and events at these two plate boundaries?